At the ECOFI General Assembly on 3 December 2019 in Brussels, ECOFI representatives discussed a number of hot topics relating to organic-based fertilisers, the EU Fertilising Products Regulation, and the upcoming policy developments related to the new EU leadership and work programme.

Members agreed on activities and events for 2020 and unanimously re-elected both Quentin Protsenko (FR, Frayssinet) and Chiara Manoli (IT, ILSA) as President and Vice-President of ECOFI respectively for the next two years. 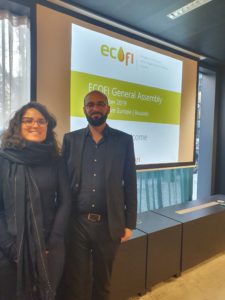 Quentin Protsenko is the Regulatory Manager at FRAYSSINET, one of the biggest organic fertilizer producers in France. Mr Protsenko has been involved in ECOFI for several years and has been engaged in its advocacy regarding the recently adopted fertilising products regulation.

Chiara Manoli (ILSA) is responsible for product registration and organic certification at ILSA SpA (Italy), where she has been employed as a researcher since 2012. Her work has increasingly focused on regulatory affairs, and she has been actively following the development of the recently adopted EU regulation on fertilising products. She has been attending the European Commission’s Fertilizer Working Group meetings as an ECOFI representative since March 2014.
For more information, contact Jessica Fitch (ECOFI Secretariat).